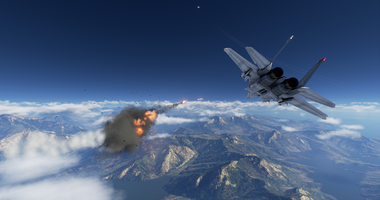 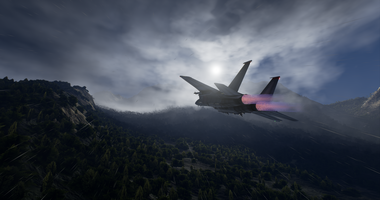 An update to the current Alpha Test

The latest version is now version 0.2.10b

I noticed in most playthroughs I have been watching throughout the week , people were struggling to even clear the first phase of the mission due to how skilled the enemy is and the odd behavior of the missiles back in 0.2.9. Naturally I don’t want to make missions impossible or hard for most people. So a lot of things has been re-balanced to make the game less frustrating for newer players. Ideally through this “Clear Skies” level I’m currently trying to find what the “standard” difficulty is for the game.

That being said, I’m sure there are people who liked the old difficulty back in terms of how the AI fought. Don’t worry those guys will be coming back in the future as a difficulty option.

(Thanks for recording gameplay footage guys!)

Missile behavior has certainly been odd, especially how the STDM kept missing the easiest shots and hit low probability shots which made them rather inconsistent.

So now, missiles should be much more consistent than before and feel snappier in general. Though do keep in mind this goes across to all missiles so enemy missiles are also slightly more accurate. However to balance out the new guidance system, the maximum velocity the missiles can get to has been doubled. Which should counter out the missiles precise guidance system. I think currently it has achieved a nice balance though there are some cases on which the missile guidance will need more work towards.

This is a new gameplay element I have been toying around with and currently experimenting. I’m mostly exposing it early due to the overwhelming amounts of requests for flares. I suppose why not.

At the moment the only function that is currently available is the “FLARE” module and is not interchangeable. At the moment it has a 7 second cooldown and causes all missiles currently targeting the player to lose tracking.

The idea is to eventually expand these modules to bring in different attributes to equip your aircraft with and . I’ve some ideas on what to bring in for this SP module mechanic and hopefully you’ll see it implemented in the next major update.

UI rendering has been significantly changed. Now they are a lot clearer and the majority of the immersive UI elements are now affected by post processing.

Hopefully this means that important UI elements such as target indicators and main HUD elements in the cockpit will no longer be obstructed and blend in with the background. This also means that the HUD in the cockpit is slightly more accurate because now they are in world space and not screen space anymore.

New options has been added and a couple of settings has been altered for technical reasons.

I’ve noticed that on 512 resolution that distant clouds could appear somewhat pixelated on a lower FOV settings. This was the recommended settings given to me from the TrueSKY documentation. However seeing that people are getting fairly decent frame rate on max settings on the old setup, I’ve decided to bump it up to 768. It eliminates most of the pixelation that occurs at a long distance without a lot of performance drop off.

The difference between 768 and 1024 was quite negligible so I’ve decided to not have it on 1024 due to performance reasons.

Let me know if there’s an issue with the subtitles with weird aspect ratios.

I’ll admit leaving the minimalist HUD in a default checked was ab it of a mistake in 0.2.9. The radar vanished on both nose cam and cockpit cam making it difficult for people to figure out the radar if they don’t go check into the options screen. So for now, the minimalist HUD will include the minimap.

I will however introduce a minimapless option for the cockpit screen in the future.

There’s not much to be written here. But resetting the controls back to default is now functional and bugs related to mouse bindings and other things has now been fixed.

The landscape has been significantly altered for “Clear Skies”. I didn’t feel like the plateaus in the previous version really represented the region I wanted to make so I’ve decided to put that kind of environment in the backburner for now and save it for later.

I’ve added a headtracking option in the gameplay options section. It’s still highly experimental and at the moment only supports the FreeTrack protocol.

If you have a freetrack IR setup please let me know how it goes. Thanks!

I will try to contact the TrackIR folks in the coming days to see if I can grab an SDK off them and implement TrackIR support to Project Wingman. Stay tuned!

It still needs more work but I hope this change makes the targeting easier to use.

A lot of gameplay values have been changed for the game.

I’ve decided to combine both 0.2.10 and the b version due to how quickly i’m putting them out together.

The enemies in the second phase of the mission has been slightly nerfed due to how difficult people have been finding it. Will be reintroduced in the future as a difficulty option.

I’ve increased the radius of what the game will think of what is in front of the camera. So now targeting should feel much more consistent across the board.

Just a small fix I’m putting out for the stalling behavior. I’ve noticed that the plane always stalls constantly if there is no throttle or brake being applied. This was not intended and has been fixed.

Some stuff that Project Wingman has been featured in. I also did an interview in some of them :)

I will try to increase the frequency of development related posts now. And hopefully from now on I can release semi regular patch fixes and updates to Project Wingman.

Anyway, that’s it for now. If you’ve reached here through that wall of text I thank you very much for your attention. Hopefully I can continue to deliver on your expectations with Project Wingman.

TrackHat user here. The profile I use for ARMA 3, War Thunder and Assetto Corsa all have a look up = look up affair. In this it's look up = look down. I'd suggest inverting the Y axis by default, or giving users the option to invert individual axis, as horizontal axis works fine.